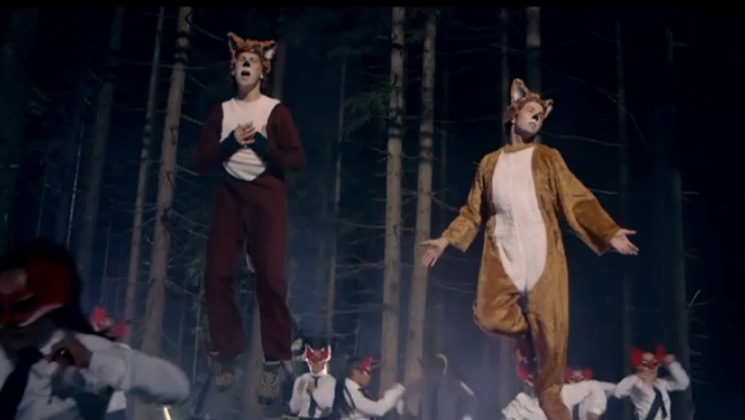 The Fox is a song to rival The Farmer and the Dell in the hopes to discover just what a fox says.

Most parents will work with their children on the sounds different animals make. It is a way to identify an animal simply by sound and to work on speech. So I naturally associated the intro of the song with my childhood.

And it seems the artist made that association as well since a grandfather and grandson are seen reading what looks to be a children’s book as he mimics different sounds. Reminds me of my books where you pushed the buttons for automated sounds.

But why they were partying as animals or even the reason for the party was lost to me. Most animals do gather together, for the most part, in little societies. But the fox seems to be more of a loner than even the lone wolf.

And then it got weird. A song about what sound a fox makes? Yes, I “What The Fox” as well over this quirky Youtube video.

And the singer tried his best to figure out just what sound the fox does make. Sounded more like musical notes or laughter than a true animal sound. Add some auto-tune for it and you’ve got the next Rebecca Black song.

The focus then after was all for the fox. None of the other animals were mentioned again, except for the horse, as we were educated on just what a fox does in its natural habitat. Though I’m questioning the blue eyes part myself.

Frankly, I don’t understand it myself. It was still very entertaining. Though we still don’t know what sound the fox make. I guess it will remain a mystery!